Why Does Coffee Make You Poop?

(What Does Coffee REALLY Do to Your Poop?) 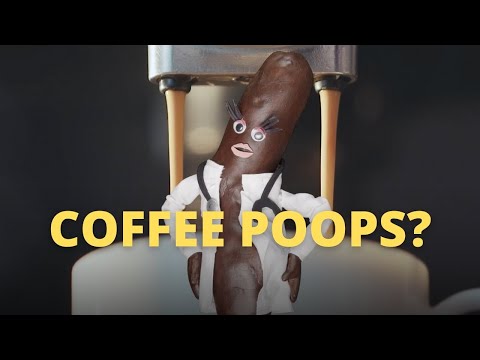 Click Here For Transcript of "Does Coffee Make You Poop?" Video

Does coffee make you poop?

I get this question all the time. Poo Dr to the rescpoo.

Wow, I think I might need another cup of Joe.

Anyway, yes coffee is a colon stimulant and that’s part of the reason your body wants to poo when it’s present.

It has something to do with the caffeine, but not entirely and it affects several parts of your digestive tract to get you primed and pooping.

For most people it is because when you wake up, your colon does to and that’s probably when you’re drinking the most coffee.

Whatever the reason, it’s good to book a beautiful bowel movement with your body on the daily and the best way to do that may be a little-known incredible nutrient that is your ticket to poo paradise.

It may sound like I’m overselling it, but I just get so excited about the perfect poop that I can’t help myself.

Do yourself a favor and click below for the perfect poop.

If you’re wondering if coffee makes you poop, you’re probably not the only one. After all, one study found that 29 percent of participants claimed that coffee induced an urge to poop.1

This suggests that having a morning cup of Joe does more than stimulate your senses. Coffee may have a laxative effect that typically triggers a bowel bowel movement within about 30 minutes of drinking it. 2

But is this really true, and if so, why? Let’s find out.

Coffee Makes You Poop…Or Does It?

Though many people swear by the laxative effects of coffee, others do not experience this bowel cleansing side effect. Remember the study mentioned above in which 29 percent claimed coffee stimulated their bowel movements? That means that the majority of participants — 71 percent — typically did not have to poop after drinking coffee.

But this doesn’t mean that coffee usually has no effect on the bowels. After all, this was a small study of just 99 participants. More research with larger groups of participants is needed to reach a firm conclusion.

Still…the reason why coffee seems to trigger an urge to poop in some people but not others is a bit puzzling. But there are several theories regarding the coffee-poop connection. Many of these theories are even backed by some pretty compelling scientific evidence.

Let’s dive into some of this evidence.

Why Does Coffee Make You Poop?

To be honest, nobody really knows why coffee makes you poop. But coffee has been shown to have an effect on the mind and the body. It makes sense, then, that drinking a cup of coffee may also stimulate bowel movements. In theory, anyway.

So without further ado, here are a few theories on why coffee may make you poop.

People have long assumed that caffeine stimulates the bowels, and there is some truth to that. For instance, several studies suggest caffeine can trigger contractions in the colon.3, 4 This moves digestive contents to the rectum for elimination.

This colonic activity is not beneficial for everyone, however. If you have IBS or other stomach and intestinal disorders, coffee may worsen the symptoms. This is because the increased stomach contractions can increase the secretion of acid in the stomach, leading to stomach pain/cramps and other painful and unpleasant symptoms.

That said, caffeine cannot be the only substance in coffee that makes you poop. After all, studies show that decaf coffee may also induce the desire for a bowel movement. 6, 7 Therefore, substances other than caffeine must be at play.

Gastrin and cholecystokinin (CCK) are two hormones that are essential to proper bowel function, and coffee triggers the release of both of them. What potential effect can this have on your poop schedule?

Well…gastrin is a peptide hormone that stimulates the release of gastric acid needed to digest food. This in turn triggers colonic activity, including the urge to poop. Meanwhile, cholecystokinin stimulates the digestion of fats and protein, which also spurs colonic activity. Studies show that both decaf and regular coffee may increase levels of gastrin and cholecystokinin and stimulate motor activity in the distal colon. 8, 9 (The distal colon is the lower part of the colon attached to the rectum.)

As these two hormones can significantly increase colonic contractions, it’s not difficult to see how coffee can cause a bathroom run for number two.

The Magnesium Bowel Effects Of Coffee

Coffee is high in magnesium, a mineral that can have a laxative effect due to its ability to relax the muscles of the intestines, thus allowing for easier passage of stool. Plus, magnesium appears to pull water into the intestines, softening the stool.

The laxative effects of magnesium are so well established that magnesium is a common ingredient in stool softeners and laxatives. As of this writing, researchers have not studied the potential link between the magnesium content of caffeine and bowel movements. But it remains a possibility.

If you drink your cup of coffee with milk or cream, your urge to poop may be caused by lactose intolerance and not by the coffee itself.

Lactose intolerance is the inability to digest the sugar (lactose) in milk and dairy products. Consequently, you may run to the bathroom with diarrhea after ingesting anything dairy. To see if this is the problem, try drinking your coffee without milk or cream.

Many people say that coffee has a laxative effect only in the morning and not any other time of day. There does seem to be some evidence to these claims, and the culprit seems to be the hormone gastrin discussed earlier in this article.

Gastrin promotes digestion that in turn triggers gastrocolic reflex designed to push food out of your intestines, all part of the digestive process. Research shows that gastrocolic reflex is more active in the morning than at any other time of the day.10

In addition, research suggests a possible link between colonic activity and circadian rhythms, the internal body process that regulates your sleep-wake cycles. For example, one 2006 study found that colonic activity is greater right after you wake up but significantly reduced at night and while you sleep. 11 So in this case, your regular or decaf coffee may have nothing to do with your morning poops!

Running to the bathroom for number two isn’t fun, but it’s good for your health. Clearing your bowels every morning supports not only digestive health but overall health!

In this respect, it doesn’t much matter if you have a bowel movement because of coffee or because your bowels movements are regular.

Speaking of healthy bowel movements, you can help fix so many of your digestive and bathroom issues, such as gas and bloating, and improve your overall health with this patented molecule that is backed by Harvard Doctor’s by clicking here!

What Are 7 types of poop?

Types of poop one encounters is categorized by the Bristol Stool Chart. This chart is a generalized indicator of how or why different types of poops look and feel a certain way. The 7 types of poop are broken up into categories based on a 2,000-person study!

Does your poo look this good? If you have Bristol Type 3 or 4 – your poop is considered “normal”!  Bristol Type 1 or 2, is where the poop is hard and difficult to pass, are indicative of constipation. Often, these types of stool can be painful to pass but don’t worry Doctor Poo has a recommended healthy-gut switch solution…just keep reading!

Should you ever worry about your poop?

Always consult your healthcare provider if you have any concerns about what your poop means. People are asked to call their health care providers if: They experience severe levels of abdominal pain or discomfort with diarrhea that does not go away when you poop or fart. Also, if diarrhea is accompanied by fever of 101 degrees Fahrenheit or higher, chills, vomiting, or fainting, call your physician immediately.

What is an unhealthy poop?

An unhealthy poop is when one poops too often (hence, your doctor asking you if you poop more than three times daily) or not pooping often enough (As such, less than three times a week) and also excessive straining when pooping. Poop that is colored red, black, green, yellow, or white. greasy, or fatty stools is unhealthy.

Help fix so many of your digestive and bathroom issues, such as gas and bloating and improve your overall health with this patented molecule that is backed by Harvard Doctor’s by clicking here!

Doctor Poo Provides More Valuable Answers for Those Hard to Ask Questions Below:

When Am I Done Pooping?

Can you poop out fat
Scroll to top